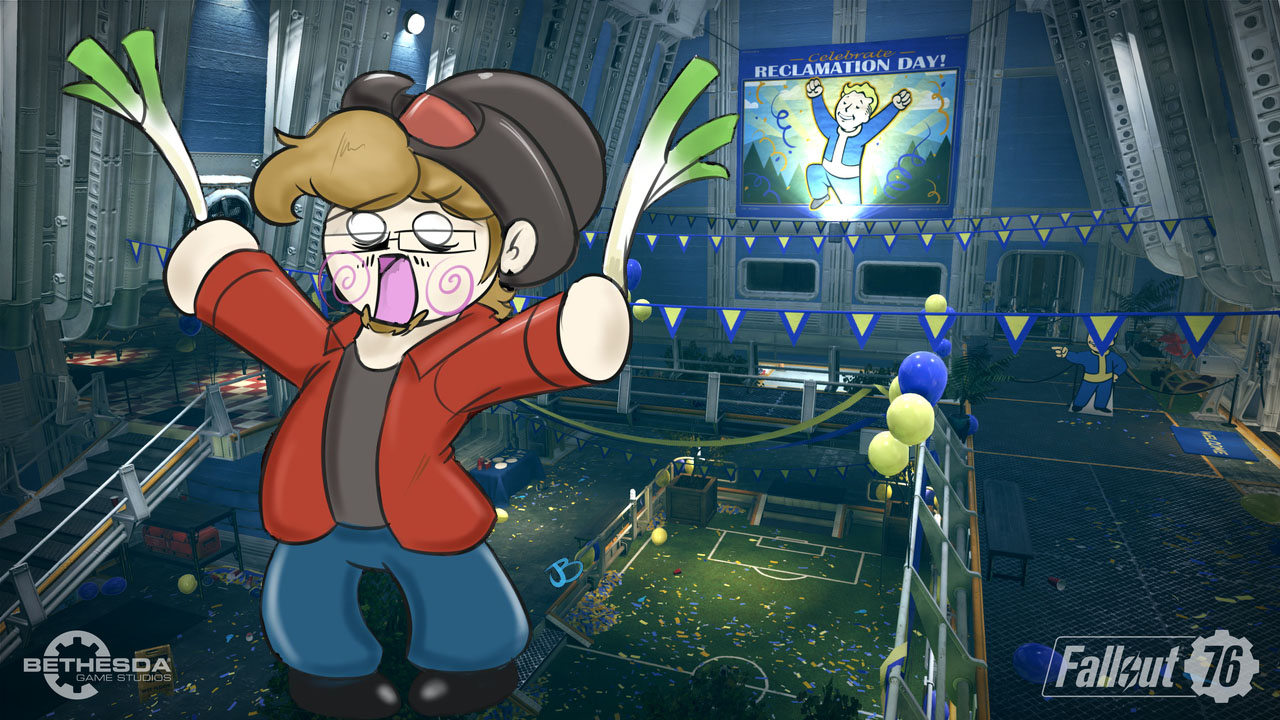 In a live stream on Tuesday Bethesda did… almost nothing. Fans were treated to a Fallout themed tribute to the Holiday Fireplace that shows up on Netflix every winter holiday. After waiting for what felt like an eternity, we finally got a glimpse at everyone’s new favorite social punching bag: Fallout 76.

Let’s start off by taking a look at the trailer:

It’s amazing that from such a short trailer, everyone in the gaming community has, for some reason, come to the conclusion that this will be a Fallout Battle Royale game. If there’s one thing we learned when the Battlefield V trailer dropped, it’s that people don’t like to remember history. Let’s take a step back into the early 2010’s.

For those that started the Fallout series with Fallout 3 back in 2008, you may not remember the first (technically three) titles in the Fallout franchise: Fallout, Fallout Tactics, and Fallout 2. These games were originally developed by Interplay and were top-down adventures.

Facing financial hardships Interplay was forced to sell the rights to the Fallout series. Bethesda came along and bought the rights to the Fallout franchise from Interplay and produced Fallout 3, their re-imagining of the series. According to a 2010 interview with Eric Caen, president of Interplay, he told Eurogamer that the team wasn’t totally against what Bethesda had done with Fallout, but felt it was a bit too serious.

Interplay kept some of the rights to the Fallout series and, with permission from Bethesda, started working on developing Fallout Online. Fallout Online was due to release some time in 2012, but in December of that same year, all rights were pulled form Interplay and the project was scrapped.

There has been speculation as to the exact reasoning behind it. Some say ZeniMax Media – the company handling the Elder Scrolls Online development and servers and owner of several gaming studios – wanted to retain control over all of the Bethesda online titles. There was talk that Interplay used assets in the game that they didn’t have rights for from Bethesda, violating their contract. Regardless Interplay was forced to scrap years of work and Fallout Online never saw the light of day.

Jump back to present day, Fallout 76 is announced. Don’t worry, they didn’t develop Microsoft syndrome and forget how numbers work, it’s a reference to Vault 76, as many fans of the series will know.

According to the Fallout Wiki entry on Valut 76 we know that it was one of the control vaults constructed by Vault-Tec. If you’re not a Fallout fan, let me catch you up with what I mean by “control vault.”

We find in the Fallout universe that Vault-Tec, commissioned by the US Government to build 122 vaults across the country in the mid 21st century, wasn’t entirely honest about the purpose of their shelters. Many vaults were used for involuntary human experimentation. For example, one vault was built with a blast door that wouldn’t close all the way, leaving the inhabitants exposed to the nuclear radiation of the war. Another vault was used as a testing ground for an airborne psychoactive drug, and still another was home to only one man and his puppets.

There are only seventeen control vaults that we know of thus far, and Vault 76 is one of them. For the people of Vault 76, that means life is pretty good, which we can see glimpses of in the trailer.

If there’s one thing Bethesda loves doing in a trailer, it’s playing some classic music while offering a slow zoom out followed by environmental shots, take a look at the trailers for Fallout 3, Fallout New Vegas, and Fallout 4, for example:

All three of those trailers follow the same visual cues, but all three depict a destroyed, post-war world. Fallout 76 may be the first trailer we have that shows the vault in all of its perfection, functional, clean.

Bringing it all together, it’s probably safe to say that Bethesda wouldn’t stray from their tried and true style of gameplay to go along with the current Battle Royale trend. I think it’s far more likely to see something similar to the Elder Scrolls Online, but set in the Fallout universe. From the Fallout 76 trailer, we can see that there’s a celebration going on. Reclamation Day, the day when the vault doors swing open and humanity is let out to rebuild and repopulate the scorched earth.

Personally, a Fallout game I could play with my friends online sounds pretty fun. As someone who was looking forward to the original release of Fallout Online back in 2012, only to be let down at the 11th hour, it would be interesting to see how Bethesda handles it. There’s plenty of videos out there of people picking apart the trailer for Fallout 76, but we won’t be able to confirm anything for certain until Bethesda tells us what’s going on at E3.

Speaking of E3, if you’d like to get in on a live discussion with us during the week of E3, or just be part of our community and discuss games, don’t forget to check out our community page where you’ll find an invite link to our Discord community.

What do you think Fallout 76 will be? Let us know on Facebook or Twitter. Do you prefer to listen to your gaming news, rather than read it? We also have a weekly podcast, This Week (in Gaming), on our Podcasts Page. If that’s the sort of thing you’re into, head on over there and check it out. We’re on Podbean, iTunes, Google Play, TuneIn, and iHeartRadio, so we’ve got you covered on platforms.

As always, stay safe out there and happy gaming!