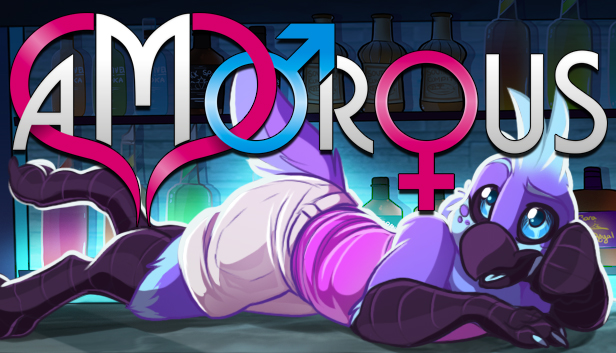 When I first booted up Amorous, I was expecting something cheeky, short, and roughly written, but where else would I set my bar for a free game? Needless to say, it didn’t take very long for Amorous to completely spoil me with what a dating sim/visual novel could be.

This game was recommended to me by Proxy, and for free! I thought it was an incredible game with a lot of depth and excellent animation.

The story surrounding you, the main character, is simple enough. You’re between jobs and looking to get out and do something with yourself. Your step-brother, Coby, has recently been dumped and offers to take you out on the town to his favorite club, Amorous. Once there, you have a choice between several characters to chat up and get phone numbers from. Overall, the story is involving and the writing is good. A lot of what really makes this game great is the depth of character, but we’ll cover that shortly.

The story of this game is that there are a wide variety of species living in a coastal town. Pretty much everyone in this town is very fluid and open about their sexuality. You are a character of your own design looking for love at a club called Amorous.  You go with your brother to help him cheer up after a bad break up and spend the game going on dates with whoever strikes your fancy.

Of the 9 characters that you’re able to date in Amorous, each one feels distinctly different. They all have their own personality traits and they stick by them as you pursue their stories. Whether you’re looking for someone incredibly submissive or someone more dominant, someone who just needs a push to follow their dreams, or even your own… step brother… there’s something here for you. I still have fond memories of my dates with Seth, Dustin, Skye, Lex, and Mercy. Their dialogue and personalities really spoke to me and I found myself getting way more involved with fictional characters than even I had expected.

The characters in this game are incredibly deep and well written. I really can’t say enough for the depth of character and personality put into every single character in this game. The date-able options are all super interesting and even the side characters are memorable.

Normally this section is for written works like smut and such, but given that this is a visual novel, I feel it applies here too. The writing in this game is very descriptive and the sexy parts are arousing. There are some typos and general grammar errors throughout, but they hardly interrupt the flow of the plot.

The gameplay is your basic visual novel, reading and reacting to character dialogue in the best way you can. Each of the 9 datable characters have three main dates that you can go on, with the first two being more in-depth character exploration, learning about what makes them tick, what drives them, and getting really into who they are as an individual while flirting. The third date has potential to end with a bang in the best way possible.
You’ll want the full nudity patch in order to fully enjoy this game. The steps are simple. Go to Steam library.

Much like Deep Space Waifu, it’s just a matter of adding a file to the game folder. Brilliant and really adds to the experience.

The gameplay is pretty simple. There isn’t a lot to say here. It’s a visual novel and it’s very easy to navigate through the story. There are also fun little mini games that add a little break to the narrative. As far as modability goes, I don’t think this game has or really needs any sort of mods.

Everything from the build-up to the act itself is so well laid out it’s hard NOT to touch yourself if you’re playing this alone. The sex scenes only level of interaction is progressing the scene, leaving both hands free outside of progressing the scene to help get you to your own happy ending. Did I fap to this? Yes. Absolutely. And I’d do it again!

The slow build of romancing the characters really adds to the eventual release of the super hot sex scenes. With the ability to revisit the sex scenes and to change the speed and splooge, this game is very easy to use for research purposes. I have opened this game just to use it as spank bank material.

There’s a reasonable amount of kink involved in Amorous.

The main kink involved here is the obvious one: furry. There are also characters that provide domination and submission. There is also a character that fills the role of being older and a little chunkier than the main character (depending on how you build your character).

Not only is this game furry AND free, but it also blew away my expectations in regards to the animation, motion, character depth, writing, and story. I found myself so involved with the characters presented that the experiences felt genuine.

This game is very well put together and so much fun to play. The replay-ability of this game is a huge draw. This game is FREE. I would have happily paid up to like $10-$15 for this game. I can’t praise this game enough. The only reason I chose not to give Amorous a full midnight rating is because while the spelling and grammar are overall very good, there are times when the errors are a bit jarring to be honest.

To hear more about our thoughts on Amorous, be sure to check out the Six to Midnight Podcast on Spotify or wherever you get your podcasts! This review was featured on Episode 3: Wait… are you a furry?