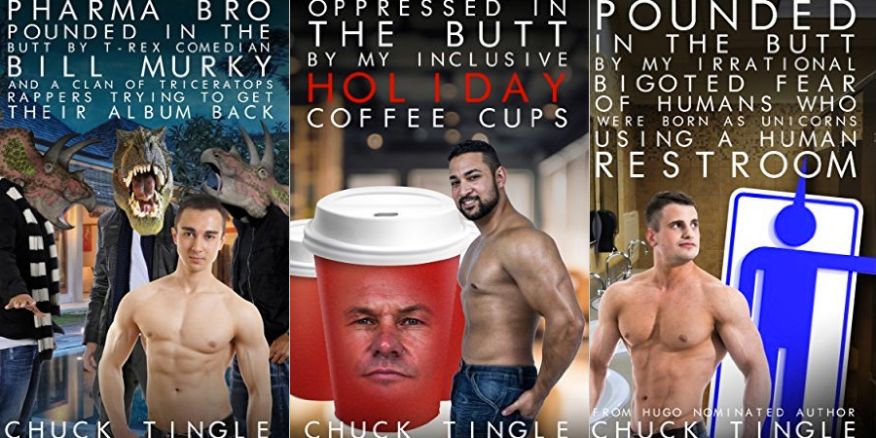 This journey has led me to discovering such authors as Edward Naughty and Chuck Tingle, but we will be discussing the latter of the two here.

Chuck tends to write stories and books about topical things and current events, such as when he wrote “Slammed in the butt by my handsome laundry detergent pod.” Most of these titles include “[Verb] in the butt by [current event or object]” and with the pandemic causing many of us to get used to working from home, it appears that the good Dr. Chuck Tingle has taken to being the Tom Clancy of Tinglers. A Tingler Clancy if you will. By that I mean he’s been pumping out stories at an insane rate, even keeping up with recent political topics. For example, one of his latest books released is titled “Mike Bence Pounded In The Butt By His Handsome Werefly” and boy, if that’s not topical, I don’t know what is.

So I had to think to myself, with Chuck Tingle producing books at such a rapid rate, how could I possibly get caught up on his books already released without breaking the bank? Well, he has collections, like “Living Object Tinglers Vol. 1” that compile three of his works involving living objects into a single book. He also has compiled collections of Dinosaur Tinglers, Unicorn Tinglers, and Bigfoot Tinglers, with the Living Objects series reaching up to 30 volumes at the time of this writing (that’s 90 short stories written about living objects pounding butts).

So, like any sane human, I made a spreadsheet to list all of Chuck’s works that I could get on Kindle, compiling first the books included in bundles and then building out from there. The goal of my list was to include every story written so far in the Tingleverse without including duplicates, so if a bundle included only stories already included in another bundle, I removed it from the list.

This left me with:

41 Standalone shorts that are not currently in collections (save for “The Entire Continent of Australia Pounds Me In The Butt” which is part of the “Oh, The Places You’ll Blow” collection, of which all other tales are in other collections already)

After running the numbers I found it would cost me a grand total of $566.95 to purchase all currently published Chuck Tingle books (physical copies for the RPG books) for my Amazon Kindle. It’s a daunting and overall pretty expensive task, but I intend to read EVERY Chuck Tingle novel released in this timeline, buckaroos. The spreadsheet I linked is my key to getting through them all. If I can manage to pick up one collection at a time I should be able to eventually work my way through the entire Tingleverse.

If you’re looking to get into Chuck Tingle for yourself but aren’t sure where to start, let me help you out! He is currently giving away four of his stories for FREE on his website in hopes that you’ll make a donation (if you can) to one of the charities he has listed that are helping in the fight against COVID19. Check it out, even if you’re totally broke, and give his work a read for yourself. You may just find yourself falling in love with the Tingleverse for yourself and helping Chuck and his fans to prove that LOVE IS REAL.

This only leaves me with one question: if I manage to collect all of Chuck Tingle’s book on my Kindle, would that make it an “Amazon Tingle?”

EDIT: Holy dang, so many of y’all came to read this article that the poor server hosting my site couldn’t handle it. Thank you all so much for stopping by and giving it a read!