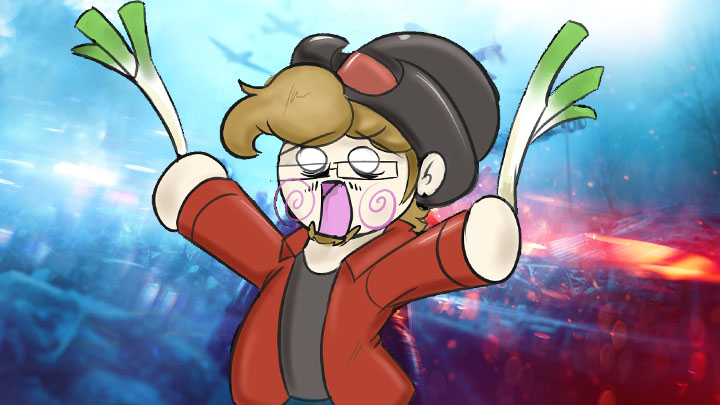 In a live event yesterday, Dice and EA revealed to the world their plans for the next installment in the Battlefield series: Battlefield V. Since everything in the gaming industry that could be considered a press release keeps popping up as a “leak” lately, we figured we’d give you the “leeked” scoop on the new Battlefield.

People think they know how numbers work, but if there’s one thing Battlefield U does, it’s shake things up. With their slogan “don’t do the same thing twice, or what other people are doing, don’t do that either” it’s clear that they’re paving the way for innovation.

Battlefield V for Vendetta will bring players to an era never before explored in a video game: World War II. Remember World War II? Pepperidge Farm remembers, and so does Dice (and Sledgehammer, and also Dice when they made Medal of Honor Underground, and a couple other titles that we won’t mention).

Check out the trailer here:

Take to the war, now as a woman! What’s that? Everyone’s upset because there’s an awesome female protagonist in a war game? That’s odd, where were you when we played through Medal of Honor Underground as Manon? Let the haters hate, this chick KICKS ASS, and with only one arm (also one prosthetic arm).

Honestly, we could be salty about this or that all day long, but when it comes down to it, Battlefield 5 looks sensational. Complain as they might, fans of the series are still going to throw their hard earned money down faster than you can say “hello old friend.” So let’s stop blabbing and get into some details, what do we know?

If there’s one thing Battlefield is known for, it’s incredibly destructible environments. Enemy hiding in a building? Tear it down. Hiding behind cover? Those bullets are eating away at it. With Battlefield Below we see the addition of base construction and fortification.

The combination of destructible environments with the ability to fortify and reconstruct shelter will offer up a whole new feeling of danger in-game. Remember the rush you used to get playing Call of Duty Black Ops Zombie mode with friends, trying to patch up those doorways between waves? Yeah, imagine that rush but on a larger scale. Unless you were one of those Pack A Puncher types that just goes around destroying everything that moves with your mad skills, in which case… darn you for being good.

To construct and fortify you’ll be needing a tool box. If there’s one thing that plagued the soldiers in World War II, it was the inability to carry BOTH a tool box AND a gas mask. As such, we’re seeing the end of gas masks and, in turn, the end of gas nades (or the beginning of some seriously messed up battles).

All we know for now is that you’ll be able to play Battlefield \/ with three of your friends online and the focus is being put on teamwork.

Battlefield Flying V will release on October 19th of this year, giving Black Ops 4 a one week head start, but let’s face it, Black Ops doesn’t even know how to work Roman Numerals, am I right? It’s Black Ops IV, not Black Ops IIII ya shmucks!

For all of the haters convinced that this game that was just announced and has yet to be played by normal humans outside of the game industry is utter garbage, it’s your turn! That’s right, linked right here in this article is a great book on Game Development using Unreal Engine 4. It’s time to stop just complaining about games and time to start creating the innovation you want to see in the world! Only through the expense of our hard earned money on books can we rise above the salty comments of yesterday and create the gaming world of tomorrow!